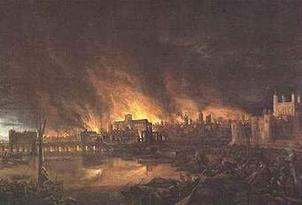 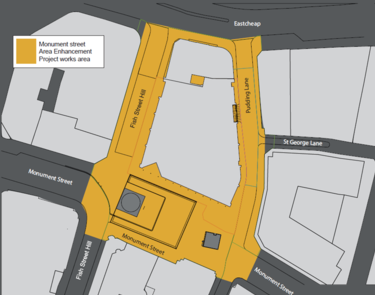 If you require further information please get in touch via the 'Contact page' or email keith@keithbottomley.com You can also email the Project Team at monumentstreetarea@cityoflondon.gov.uk.
The Monument remained open for the duration of the enhancement works.

Improvements to the Monument Area in our Ward

A new landscape design for Monument Yard, Pudding Lane and Fish Street Hill areas has now been completed. I have been an active member of the working group, as your elected representative, and organised some drop in sessions for local businesses and residents to share their view on the proposals. We worked to ensure that the new design meets the current and future needs of all users of the area. I was particularly keen that we achieved levelling of the area to make it more accessible to all and look better. I secured that agreement.

The main feature of the improvements is to have created that level surface with new drainage and a new public seating area in Monument Yard, which replaces an existing seating area. The new seating area consists of timber seats and granite stone benches with 'London's Burning' rhyme engraved onto the surface, new semi-mature trees, as well as improved lighting. The new seats will provide views of The Monument and of a new visual display, an enhanced visitor access to The Monument showing live views from the gallery on the ground.

There are a number of other elements of the project. As part of the wider works the temporary concrete paving around the Monument Building has been replaced with new Yorkstone paving. The carriageways along Fish Street Hill and Pudding Lane have been repaved with granite setts. Interpretation for The Great Fire of London has also been improved with a new plaque in Monument Yard indicating where the Great Fire began on Pudding Lane.

impact on the City of London. In the early hours of 2nd September 1666, a fire began in

a bakery which, until recently, was widely understood to have been in Pudding Lane at

the heart of Bridge Ward. The Monument was erected as a memorial to the fire featuring

a plaque that claims the fire began 202ft to the east. A historian has now used hand

drawn city plans from 1679, and this plaque, to pinpoint the exact location of the

bakery which he believes was in front of Peninsular House on Monument Street.

This location would have been part of Pudding Lane at the time of the fire.

The fire destroyed five sixths of the City and over thirteen thousand houses were burned or demolished, and over seventy thousand people were left homeless. A massive reconstruction effort was mobilised and the Parliament of England established a court to settle all differences arising between landlords and tenants of burnt buildings. The Fire of London Disputes Act 1666 was enacted for these purposes with the long title "An Act for erecting a Judicature for Determination of Differences touching Houses burned or demolished by reason of the late Fire which happened in London." Rulings were overseen by judges of the King's Bench, Court of Common Pleas and Court of Exchequer who became famously known as the ‘Fire Judges’. Portraits of the 22 judges by John Michael Wright were put up in the Guildhall by the city in gratitude for their services. These paintings, completed in 1670, hung in London's Guildhall until it was bombed during World War II; today only two (those of Sir Matthew Hale and Sir Hugh Wyndham) remain in the Guildhall Art Gallery, the remainder having been destroyed or dispersed.

After the Great Fire, London remained a building site for many years, clogged with carts carrying building materials. Workmen were attracted from all over the country in search of steady work and high wages – something that sounds familiar with the London we know today. Coinciding with the 350th anniversary of the Great Fire, the Museum of London marked the anniversary with a major exhibition Fire! Fire! It was part of the Great Fire 350 Project, a programme of public events and activities in the City promoted by the City of London Corporation, the Barbican, Artichoke and others which culminated in an event at the Monument in our Ward to mark the anniversary on the first weekend of September 2016.